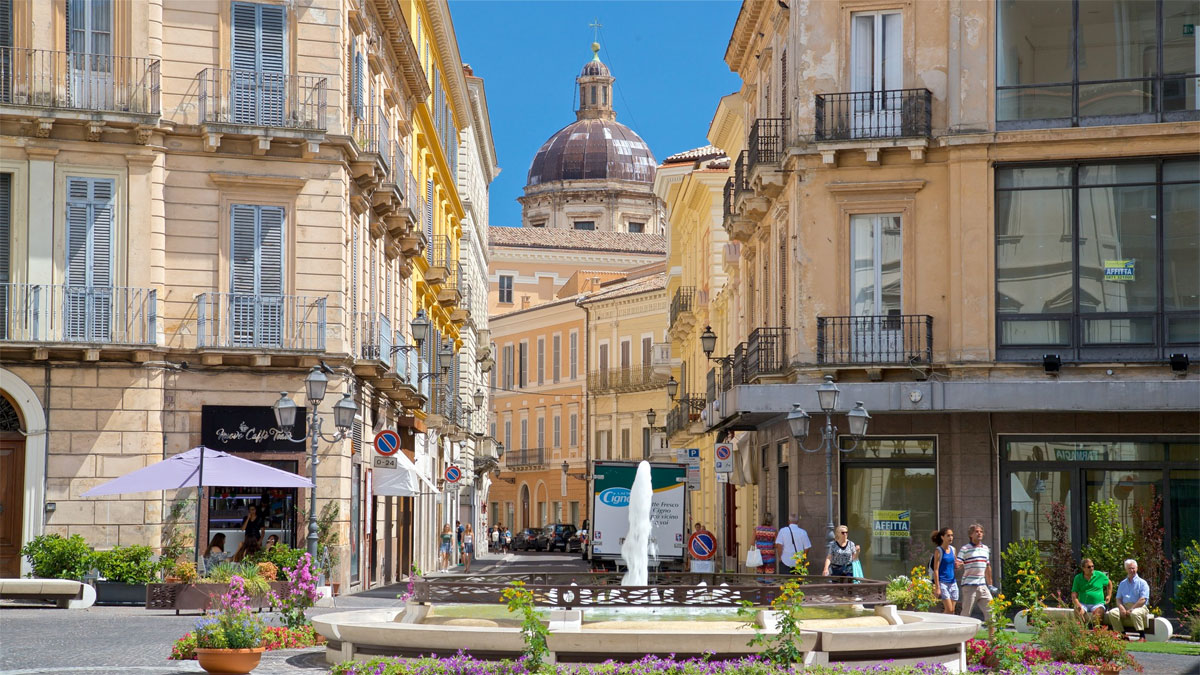 Abruzzo city of just under 50 thousand inhabitants , Chieti is divided into two parts: the Chieti scalo district is located in the Val Pescara, while the hilly historic center is surrounded by the Alento and Pescara rivers. Both the mountains and the sea are within walking distance, and this makes the Theatine town a very interesting tourist destination.

Chieti Alta represents the historic city center, while Chieti scalo is to the north and welcomes industries. Furthermore, many students live here who attend the campus of the University of Studies named after Gabriele d’Annunzio which is based in via dei Vestini.

How to get to Chieti

The closest airport to Chieti is that of Pescara. If you travel by train, however, you can take advantage of the line that connects Rome with Pescara and get off at Chieti station. By car, finally, along the A14 you have to exit at Pescara Ovest Chieti and then take the highway for Chieti Centro immediately after the toll booth is the SS5 Tiburtina Valeria.

What to eat in Chieti

Tagliolini and strozzapreti are two of the typical first courses of the Theatine cuisine, which also offers numerous specialties of both meat and fish: it ranges from tripe to pennese to sheep meat, passing through wild boar and pork offal ‘ndocca a ‘ndocca. Do not miss the fish soup made with monkfish, octopus, shrimp and redfish, while the pallotte cace e ove, the ‘ngrecciata, the tajarìi fasciule and pork rinds and the sagne a pezze are traditional. During the Christmas period, a typical dessert is the cicerchiata, not very different from the Neapolitan struffoli.

What to do in Chieti

If you want to take a walk through the streets of Chieti, you could only start from Corso Marrucino, which is the main street of the city and allows you to reach the historic center after crossing Piazza Trento e Trieste and Piazza Vico: right in Corso Marrucino you can find the palace of the province and that of the town hall.

The Cathedral of San Giustino deserves to be seen, which is the oldest church in Chieti, dating back to the 10th century. The external appearance is in neo-Gothic style, while the interior is neo-baroque, with paintings by Ludovico de Mayo and Saverio Persico and stuccoes by Stefano Mambrini. An iron bust of St. Justin of Chieti is present in the Gothic crypt: it was made by Nicola da Guardiagrele.

In the list of monuments to be discovered in Chieti there are, then, the medieval church of Santa Chiara, in via Arniense, and the Church of San Francesco al Corso: the first in the past was a prestigious monastery of the Poor Clares, and houses a main altarpiece by Giovanni Battista Spinelli; the second, on the other hand, has a spoked rose window on the medieval façade and houses paintings by Spinelli himself and by Ercole Graziani.

There Church of San Domenico of the Piarists, on the other hand, it houses an altarpiece depicting St. Joseph Calasanzio, which was painted by Giacinto Diana at the end of the 18th century. Finally, the Church of the Sacred Heart, in neoclassical style, and the Church of Sant’Anna, at the entrance to the cemetery, are worth mentioning.

Where to go in Chieti

The National Archaeological Museum of Abruzzo is an almost obligatory stop during a visit to Chieti: it is located in the premises of Villa Frigerj, whose large garden is the largest public park in the city, with fountains and centuries-old trees, but above all panoramic terraces facing towards Mount Maiella.

In Largo Vico stands out Palazzo Fasoli , with a rococo-style coping and a Pompeian red façade, while Piazza Valignani is dominated by the Palazzo della Banca d’Italia. Palazzo Martinetti Bianchi overlooks via de Lollis, once a convent of the church of Sant’Ignazio, which after being deconsecrated has become a theater.

Chieti is a city full of spectacular fountains: for example in the Tricalle district there is the Fontana dei Cannelli, with nine basins, built in the second half of the seventeenth century by Baron Antonio Valignani. It is thought that the Fonte Grande, on the other hand, dates back to almost 2 thousand years ago, near a thermal complex. Much more recent is the bright fountain, built in 2010 in Piazza Valignani, to tell the truth on an ancient sacred well.

The Roman baths of Chieti

In the eastern area of Chieti there are the ancient Roman baths , from the 2nd century AD, of which the remains remain today. But this is not the only legacy left by the time: in fact, the so-called temples of St. Paul are located in Piazza dei Templi Romani. Furthermore, under the historic center there is a real underground city, with a system of cisterns built several centuries ago. Among other things, some of these underground environments were used during the Second World War as an air-raid shelter.