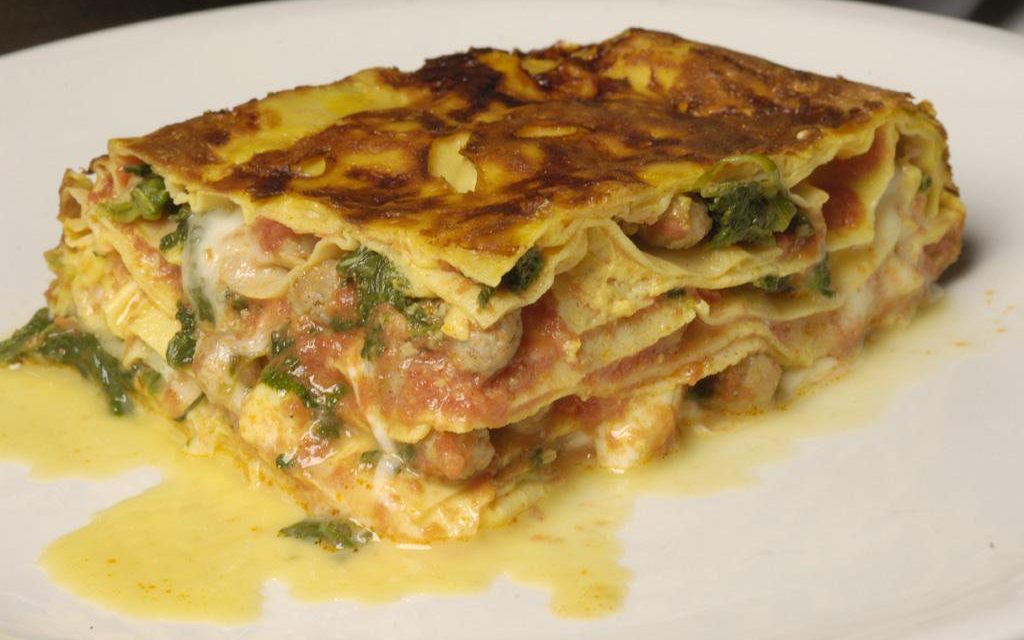 In Abruzzo is celebrated the gastronomic tradition which has been handed down from generation to generation with many genuine and delicious recipes , the secret of some of which is still carefully guarded.

At the center of the Abruzzo table there is a kaleidoscope of flavors which originate in what was there poor kitchen of a time, made, that is, of simple and high quality ingredients and that today is revealed, instead, very rich in taste and more and more appreciated . Let’s find out what they are the 10 best recipes of the Abruzzo tradition.

Prepare yourself using the tool from which they are named, in dialect called maccarunare , the guitar spaghetti (or macaroni alla chitarra) are a format of fresh pasta which stands out for it thickness and for his square section: they are therefore perfect for welcoming flavorful toppings .

They are part of the Traditional Agri-food Products (PAT) of the region. They prepare themselves in different ways, but there typical recipe is the one that sees them together with the meat sauce and the exquisite pallottine . Let’s see how they are prepared. Ingredients for the pasta (4 people)

Ingredients for the sauce

Ingredients for the balls

Procedure for the dressing

The scrippelle ‘mbusse they are rolled scrippelle and serve with broth of hen. They were born in Teramo from an oversight of Enrico Castorani , assistant cook at the French officers’ mess, who knocked some down Crepes in a pot which, in fact, contained del broth .

They are a delicious dish suitable for autumn and winter table , perfect for the most important holidays, Christmas and Easter. Let’s see how they are prepared. Ingredients for the scrippelle for 4 people

Ingredients for the broth

The Virtù are preparing on the occasion of the May 1st . They are a dish that celebrates spring: full of vegetables seasonal, but not only.

In fact, many are also part of his recipe ingrediants of the winter just ended and that’s it mix to offer that exceptionally greedy end result that makes the Virtù completely different from a simple minestrone.

The procedure for cooking the Virtù it is very simple, but rather long , so it is recommended to start cooking them at least one day before . Let’s see how they are prepared. Ingredients for the broth

Ingredients for the meatballs

The recipe for this delicious specialty is typical of Teramo and takes its name from the large copper vessel, the callara , which in the past was used to cook sheep meat directly on the fire. It is a dish that needs very long cooking times , necessary to make tender sheep meat.

Its origins date back to the period of transhumance , it was, in fact, prepared by the shepherds to use the sheep meat death on the way, because they are elderly or injured. It is the protagonist of some festivals famous, including that of Gran Sasso Island . Let’s see how it is prepared. The timballo it is different from any other regional timbale: it is prepared, in fact, with layers of scrippelle that, thanks to them subtle delicacy , they welcome the very seasoning perfectly rich and everything to taste of this delicious delicacy dedicated, in particular, to the Christmas and Sunday menus. Let’s see how it is prepared.

Ingredients for the scrippelle (4 people)

Ingredients for the filling

As the name suggests, its recipe originates from Nereto and is a specialty recognized as Traditional Agri-food Product .

The capra alla neretese is a tasty, aromatic and colorful dish based on goat meat and with Red peppers . It is dedicated to the menu of Easter . Let’s see how it is prepared. The mazzarelle are a dish dedicated to the Easter table and pay homage to offal which in this recipe comes expertly cooked , as was done in the poor kitchens of the past.

At the time, in fact, the peasant women did not have the Lamb meat for Easter, but only hers less noble parts , which, however, they knew reinterpret with wise passion giving rise to a special dish like this, which is still enjoyed today. Let’s see how it is prepared. It is said that the brodetto alla vastese was created by a fisherman’s wife, who, for to vary the usual dish based on fish , one day he decided to add gods tomatoes , garlic and parsley .

Lu vrudatte , which must be cooked in its terracotta pan, said tijelle , is prepared using fish of different varieties , is made very tasty by the hot pepper and, according to its original recipe, the pulpies half-time tomatoes from Vasto are those considered most suitable. Let’s see how it is prepared. Typical sweets inevitable on the Christmas table a, after the first bite i caggionetti offer the palate an exquisite stuffed which varies according to the areas in which they are cooked. It can be, for example, a filling based on chickpeas you hate Montepulciano grape jam , the famous and very good scrucchiata . Let’s see how the stuffed ones are prepared chestnuts, almonds, honey and chocolate . Ingredients for the dough

Ingredients for the filling

It is rich in layers of Sponge cake bathed in liqueur, it is full of a sweet tooth stuffed , is rich in colors and is, above all, full of goodness : it is no coincidence that she is considered the queen of cakes.

The pizza dolce abruzzese never misses on the Abruzzo table of every occasion of celebration, but in the past it was there wedding cake par excellence and could get to have up to 50 centimeters in diameter. Let’s see how it is prepared. Ingredients for the sponge cake

Ingredients for the syrup

Ingredients for the decorated icing