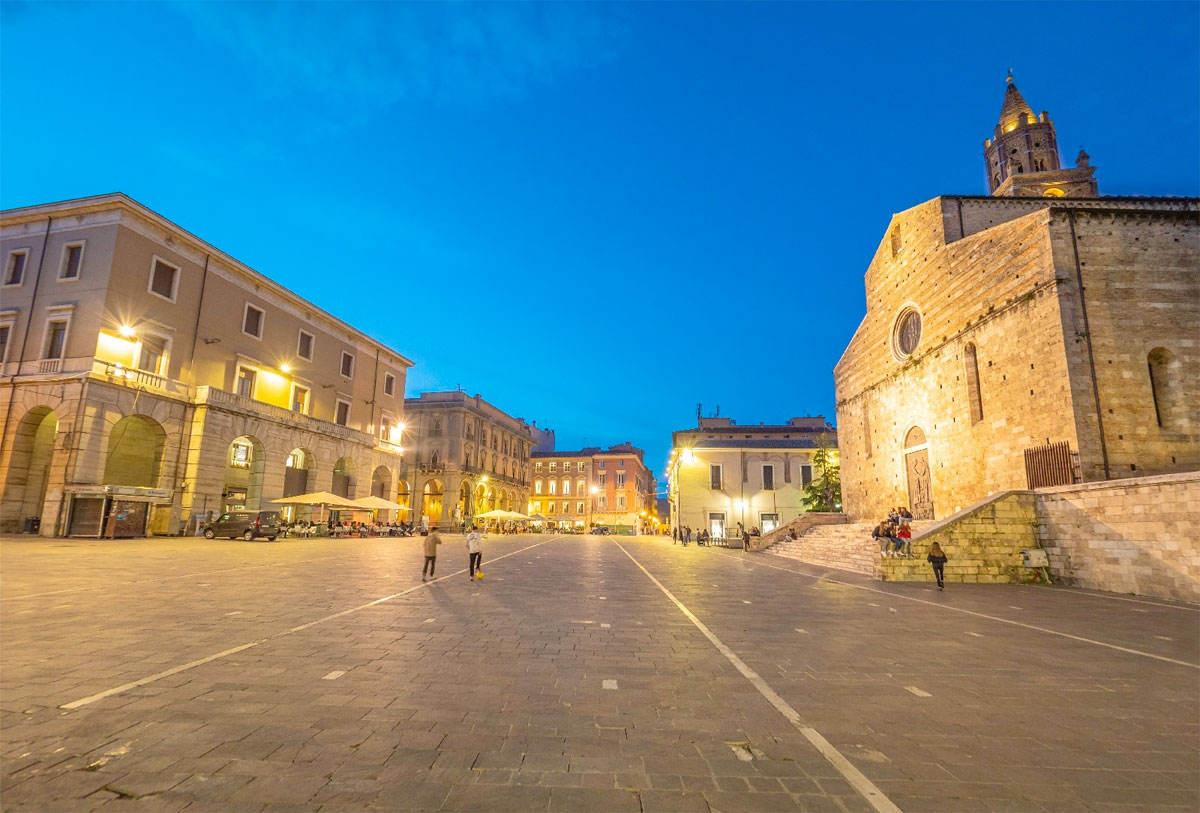 City of just over 53 thousand inhabitants , Teramo houses numerous remains from the Roman era. It is located in the northern part of Abruzzo, at the foot of the Gran Sasso, in the Val Torino, right at the point where the Tordino river flows into the Vezzola stream, which surrounds the historic center.

How to get to Teramo

The Cathedral of Santa Maria Assunta

The Cathedral of Santa Maria Assunta is certainly the most important monument in Teramo. The cathedral has a unique architectural style, and dates back to the second half of the 12th century. Made in romantic style , houses the polyptych by Jacobello del Fiore, a Venetian artist, and the silver frontal by Nicola da Guardiagrele. Since 2007, the crypt of San Berardo has been open to the public, which was brought to light after more than three centuries.

Also worth seeing in Teramo is the sanctuary dedicated to the Madonna delle Grazie: it is located in Largo Madre Teresa di Calcutta and was built starting from 1153. Inside it is possible to admire frescoes made by Cesare Mariani and a Madonna and Child by Silvestro dell’Aquila.

In the historic center you can also visit the church of Sant’Anna dei Pompetti , the only early medieval building in the city. The back wall houses a Madonna with Santa Lucia and Sant’Apollonia, the work of Giacomo di Campli. Still, the Church of Sant’Agostino is worth a visit with an eighteenth-century painting of the Madonna della Cintola.

The main squares of Teramo

Piazza Dante Alighieri is one of the most important centers of the city, with the Church of the Misericordia. Largo Melatini, in turn, is the ideal destination for a stroll, with the Palazzo dei Melatino of medieval origin and the Church of Sant’Antonio. Finally, in Piazza San Francesco there is the structure of what was once the old psychiatric hospital.

The culinary specialties of Teramo

The typical dish of Teramo is represented by virtues, which according to tradition is made with the arrival of spring for a preparation that takes 3 days and 3 nights. The list of ingredients that make up this dish is really long, which contains beans, chickpeas, lentils, broad beans, endive, fresh peas, artichokes, onion, garlic, spinach, chard, chicory, celery hearts, turnip greens, aromatic herbs, courgettes, pellets, pork rinds, pig’s feet, pig’s ear, rind and ham. The various ingredients cook on their own and then be mixed to dress tortellini or fresh pasta. In Teramo, then, scrippelle are cooked, which are very thin omelettes similar to crepes. The scrippelle mbusse, in particular, are covered with Parmesan cheese and dipped in chicken broth, while the scrippelle timbale is a more consistent variant. Do not miss the chickpea, mushroom and chestnut soup and the maccheroni alla chitarra, which are actually spaghetti.

There are many archaeological sites of the city , like the remains of the Roman amphitheater, which have about 2 thousand years of life, and a few meters away the Roman theater, a few decades later. In Cona district , instead , you can visit the Archaeological Park of Ponte Messato, with a Roman road. The Lion Mosaic, in turn, dates back to the 1st century BC, while in Piazza Sant’Anna next to the church it is worth discovering the remains of a Roman villa of about 2 thousand years ago.

A river park that runs along the Tordino and the Vezzola crosses Teramo and can be traveled on foot or by bike; connecting the areas is a double-arched wooden bridge. On the other hand, near Porta Reale there is a green space dedicated to Ivan Graziani, a singer-songwriter from Teramo.

There Holy Week in Teramo it is one of the most awaited events by the local population, and includes decorations in all the most important parishes in the center. At the end of July, however, the Sacra Festa dei Trionfi is staged, a medieval historical re-enactment that is staged in Piazza Martiri della Libertà, with songs and procession parades that involve the historic districts of the city.