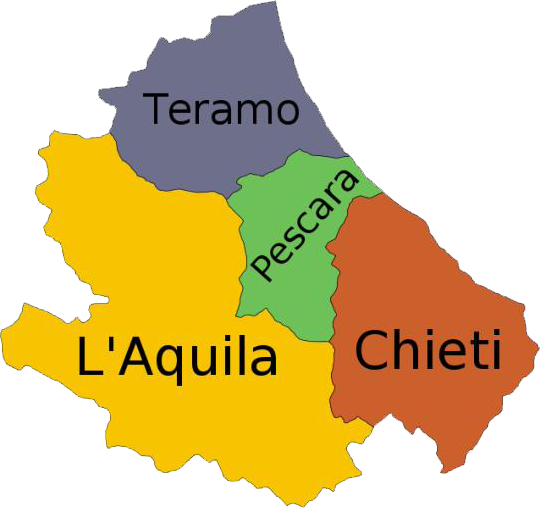 There are four provinces in Abruzzo: Teramo, Pescara, Chieti and L’Aquila.

The province of Teramo

The territory includes a very large hilly area, which extends between the Adriatic coast and the eastern side of the Abruzzo Apennines, with the Laga massif and the Gran Sasso: here is the Calderone glacier. Also worth mentioning are the Twin Mountains, which border the Marche. There are numerous seaside resorts in the province of Teramo: in addition to the aforementioned Roseto degli Abruzzi and Giulianova, there are also Silvi and Pineto, without forgetting Tortoreto, Alba Adriatica and Martinsicuro.

The industrial area of Scerne di Pineto it hosts several internationally known companies in the cooking and aluminum processing sectors. Here, moreover, the Colline Teramane is produced, which is the only DOCG wine in all of Abruzzo: a delight on the palate. Finally, the port of Giulianova is an important reference point for the fishing sector.

Read also: The city of Teramo

The province of Pescara

The province of Pescara is the smallest in all of Abruzzo, and also boasts the highest population density. Bathed by the Adriatic Sea, it is surrounded by the other three provinces of the region. Government Palace, located in Piazza Italia in Pescara, is the seat of the Province. It is a rationalist-style building which also houses a library named after Gabriele D’Annunzio and the prefecture.

The territory of the province it welcomes the final part of the Aterno river, which is called Pescara here, and is bathed by tributaries such as the Lavino, the Orta and the Tirino. To the north-west is the Gran Sasso d’Italia massif, but the hills dominate: for this reason the climate is generally mild.

In the province of Pescara there are the natural reserve of the Pineta di Santa Filomena and that of the Piana Grande of the Majelletta . It is also worth seeing the Valle dell’Orgento, the lake of Penne with its botanical garden, the sources of the Pescara river, the lake of Alanno, the sulphurous springs of the Lavino and the equipped territorial park of Vicoli. Curiosity: in the municipality of Rosciano, the hamlet of Villa Badessa is a historic Arbereshe settlement, which dates back to the eighteenth century.

Read also: The city of Pescara

The province of L’Aquila

In all there are just over 292 thousand inhabitants of the province of L’Aquila, which is the only one in Abruzzo to have no outlet to the sea. It is on one side of the less populous province and on the other side of the wider province at the surface level.

In addition to the other provinces of the region, it also borders with the provinces of Rieti, Rome and Frosinone in Lazio and with the province of Isernia in Molise. It was established in 1806. From a geographical point of view, the province of L’Aquila is home to various basins of lake origin, with anthropic settlements surrounded by the Ernici Mountains, the Monti della Laga, the Marsicani Mountains and the Maiella. Very well known, even outside the region, are the Piani di Pezza and Campo Imperatore.

Read also: The city of L’Aquila

The province of Chieti

The second largest Abruzzo province is that of Chieti, which is also the most populous with over 376 thousand inhabitants. To the north-east it is washed by the waters of the Adriatic sea ; it borders the provinces of L’Aquila and Pescara, as well as those of Isernia and Campobasso in Molise. Chieti, which is the provincial capital, is a city that developed from the ruins of Teate, an ancient Roman city, in the eighth century.

The acropolis of Chieti is located on Colle Civitella, which also houses the Roman amphitheater, where medieval fairs were once held. Another important city in the province of Chieti is Vasto, itself of Roman origins with the name of Histonium : the Church of Sant’Antonio di Padova houses the Roman baths of the past. The core of the city is represented by piazza Rossetti.

Still, the province welcomes the city of They launch , with a historic center that has been very well preserved; here is the Cathedral of the Madonna del Ponte. Finally, it is worth mentioning the maritime city of Ortona, whose historic center was heavily damaged by the cannonades that occurred during the Canadian battle in 1943.

Read also: The city of Chieti