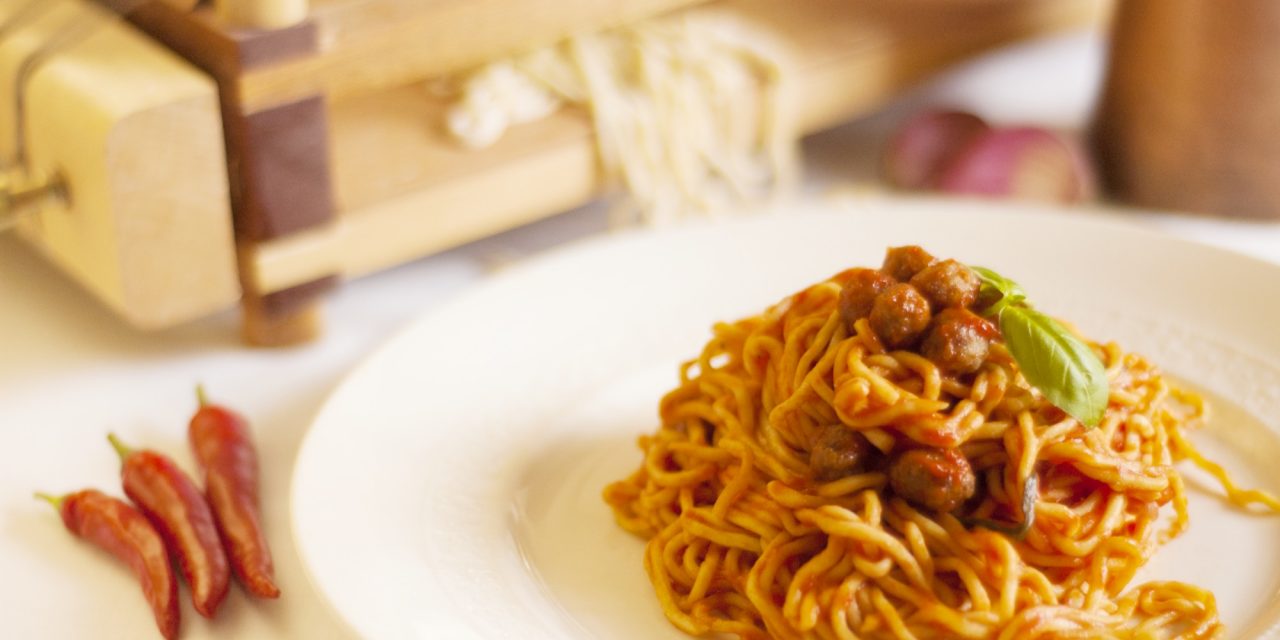 There exquisite variety of Abruzzo cuisine offers a regional table that leaves room for many dishes prepared with excellent local ingredients. They are dishes that tell history and traditions dishes of the different areas and allow you to taste the intense flavors of kitchen of Mountain and the delicious and delicious ones that come from sea proposals .

A ideal Abruzzo menu it is, therefore, particularly wide, able to satisfy all palates by letting them discover aromas and flavors of the past that cheer the present with theirs unique and precious delicacy.

The value of authenticity

At the base of the regional cuisine there are ingredients of high organoleptic value and of genuine quality . They are typical local products well known: from the precious oil to the saffron , garlic, aromatic herbs, passing through legumes of rare goodness and arriving at cheeses, cured meats, the magnificent truffle and without forgetting the hand made pasta , the freshest fish, the excellent pork and Lamb , the famous Abruzzo sweets and much more to accompany with the fine red and white wines from Abruzzo . The recipes that are enjoyed in restaurants of tourist resorts, in those immersed in the scenario of parks , in the timeless alleys of the villages , within the stages of gluttons food and wine tours which touch the whole region, refer to more traditional gastronomy and arise from what was once there poor kitchen of shepherds and fishermen.

There are many different dishes , irresistible, not to be missed to taste: they are the same ones that were cooked in distant times and that they have kept their goodness intact , as well as with regard to the craftsmanship of typical products, including, for example, the precious ones cheeses with a unique flavor and greedy cured meat .

The Abruzzo cuisine it is made up of recipes that are themselves handed down over time : they have reached today in all their original purity, because passed faithfully from generation to generation and also because the geographic configuration of Abruzzo has allowed the region to remain well protected and isolated and, therefore, without undergoing culinary contamination.

In a gastronomic journey that starts from the meat one cannot help but start by talking about skewers : simple and super tasty, they are truly considered the gastronomic symbol of the region. There local meat high quality, however, is also the basis for the creation of intense and aromatic sauces and delicious meatballs that go to season another Abruzzo specialty: pasta alla chitarra , as well as any other type of handmade pasta.

The sausages prepared in sauce are, however, the ideal condiment for polenta and which is completed with a puff of cheese pecorino cheese grated and, together with the minced meat, they also become the tasty filling of large ravioli called Fregnacce . Furthermore, the Turkey meat , indispensable for the very famous Canzanese Turkey .

Between typical seafood dishes , in addition to the most famous soup , there is monkfish in its various interpretations, the giuliese sole , cod with potatoes or sweet and sour, the tiella of anchovies and, of course, the goodness of the scapece chietina , from the mussels with saffron , of the giuliese-style fish appetizer , of the raw baby squid.

The high quality of the Abruzzo legumes it is also all available to a famous dish such as Virtue Teramo , but also for sagne and chickpeas and for soups which see them as absolute protagonists, starting with the one with lentils and chestnuts .

For what concern cheese , even in this case there is only the embarrassment of choice. In addition to using it as final dressing for pasta with sauce , lends itself to the preparation of the classic fried cheese or it is used to do i fiadoni , ravioli with an exquisite stuffed with pecorino cheese and finally, super greedy they are grilled smoked cheese skewers .

Famous recipes: the tale of tradition

The classic Abruzzo first course is the one with pasta alla chitarra : a format that originates in Five hundred . It is said, in fact, that at the time in the kitchens of the nobles the macaroni to lu rentrocele and which were made by cutting the sheet with a special iron, the tumble , creating, with the movement, in fact, said rentrocele , the ancestors of this format.

The macaroon or carts , that is the tool with a shape similar to a guitar used to give life to this type of pasta, invented in Eighteenth century and, despite being replaced by more modern tools, it’s not uncommon find it in some homes in which it is still used to give life to spaghetti.

The spaghetti alla chitarra with meatballs or enriched with the aromatic freshness of truffle however, these are just some of the Abruzzo recipes now appreciated and known not only at a regional and national level. In fact, they accompany them many other delicious traditional recipes , starting with pallotte cace and where , which, as the name suggests, are delicious meatballs made with cheese and eggs.

It is a preparation that refers to the concept of poor kitchen Abruzzo, because it arises from the need of the housewives of recover every ingredient available at home and also of the fact that they had no meat available. It is also said that these delights were an inspiration for the pasta carbonara .

What we do know for sure is that, being a hearty and tasty dish , which is prepared quickly, they were perfect as food for the peasants’ lunch who worked in the countryside. Cheese and egg they are, moreover, also the ingredients of a very good typically Easter recipe that sees the protagonist Lamb meat of which they create one delicious cream-dressing with which the meat is mixed.

The fish soup it is one of the best known and most appreciated recipes of Abruzzo seafood menu and this too is one poor cooking recipe . It arises from the fishermen’s need for use less fish noble that they had and which, therefore, was not very suitable to be sold.

There are some of this recipe variants : depending on the place, in fact, it is cooked differently. Of the brodetto vastese , which sees a marriage of sea and land , it is said that it is the original one and that it is born in the 19th century from the imagination of a peasant woman who, in order to make the daily fish dish more palatable also from the chromatic point of view, seems to have added a tomato . It is, however, since 1878 which refers directly to half-time tomatoes that is, those that go strictly used for this dish .

The preparation of the brodetto alla vastese and in any case, regulated by a specification which has defined all its key points: from type of terracotta pan which is used for cooking (called, in dialect, the tijèlle of cràite ) to the technique of pan rotation movement during cooking to mix the soup.

Between sweet recipes more delicious, there are ferratelle which, however, are known in many other names: pizzelle, cancellate, nevole, nivole, neole. They are gods pods , rigid or soft, which can be garnished with jams of all kinds, with melted chocolate, with creams .

Their origin seems to be really very distant in time . It seems, in fact, that they are direct descendants of the crustulum Roman: a similarly shaped biscuit that was prepared on important occasions.

There roundup form of ferratelle derives from cooking the dough on a special plate, the iron . In the eighteenth century the irons were made by blacksmiths who personalized them on the basis of the client’s requests, so when the ferratelle , these simply didn’t have the typical net or gate shape , but they could also contain, for example, the initials of the person that made them prepare. The irons they were also considered precious objects , so it was not uncommon for them to be part of of the brides’ trousseau .

Another truly irresistible recipe is that of Bocconotti : desserts based on shortcrust pastry with a delicious filling of grape jam, chocolate and almonds . It seems they were born in Castel Frentano in the eighteenth century from the imagination of a maid who to prepare something original to his master he created a shortcrust pastry in the shape of a cup , without handle, in which he placed a filling of coffee, chocolate, ground almonds, eggs and which he covered with a lid of shortcrust pastry.

There gluttony of that dessert it was so appreciated by the owner that he ate it in one bite and when he asked the maid what the name of that delicacy was, legend has it that she replied bocconotto , inventing it at that moment simply inspired by the voracity with which it was tasted. In fact, it should be remembered that the size of the original bocconotto was smaller than the current one and remained so until the mid-twentieth century.

Could it be interesting for you: The 10 best recipes of the Abruzzo tradition