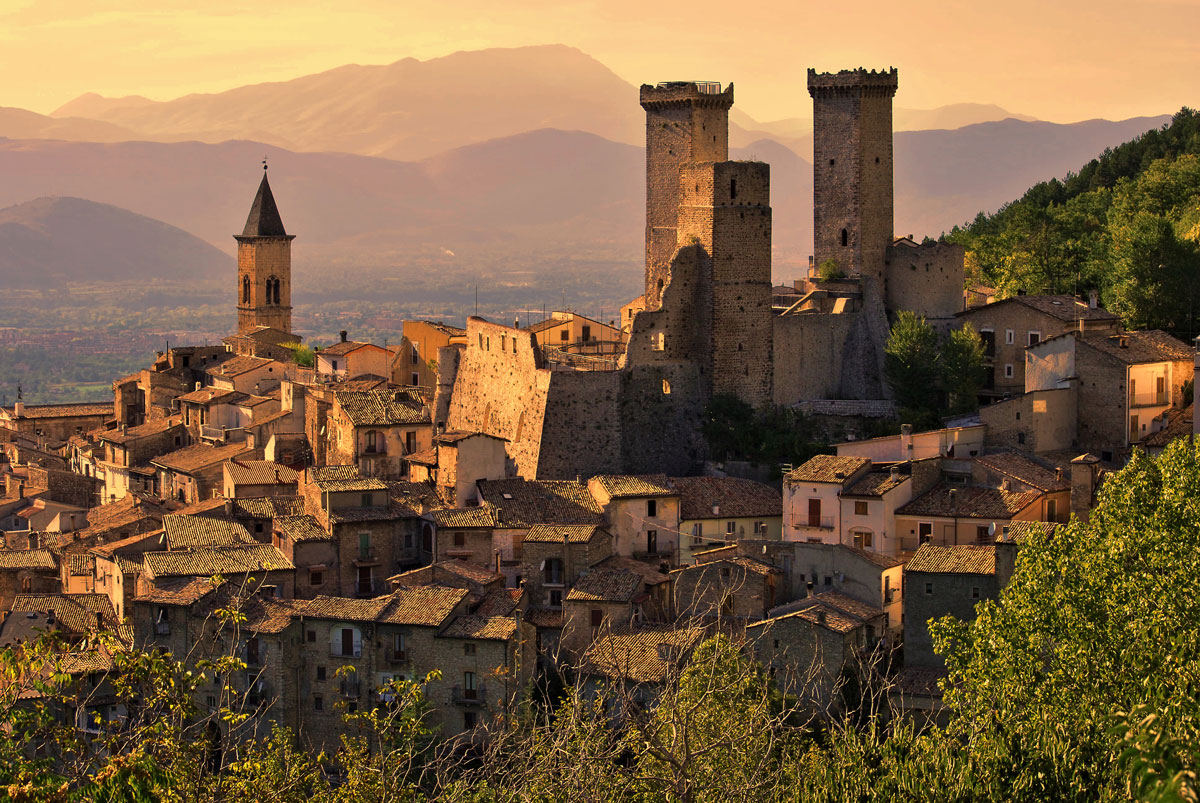 Visit i Abruzzo villages it means taking a leap into the past, breathing the air of a distant time, rediscovering the traditions that build part of the history of these places. Let’s find out what they are i 10 most beautiful villages of Abruzzo : places that have seen the charm of their identity confirmed by joining the Most Beautiful Villages in Italy .

Santo Stefano di Sessanio it is a pearl within the Gran Sasso National Park. It is located in the province of L’Aquila, near Campo Imperatore, in a privileged position in the mountains. The white color of the limestone with which it was built stands out on the horizon creating the vision of a suggestive and peculiar environment. Since 2002 the village has linked its name to the widespread hotel of Daniele Kihlgren, Sextantio , which made it possible to give a new life to this locality. Santo Stefano di Sessanio , in fact, it currently offers a high quality accommodation proposal and for a selected and international tourism that is welcomed in this peculiar structure whose interiors are furnished only with period furniture and where the linen used was created following the ancient traditional weaving rules .

Its tourist itinerary includes a visit to the Medici tower and to local churches, including that of Saint Stephen and the Church of the Madonna del Lago .

The life of the village it is very much alive from the cultural point of view and the initiatives implemented for encourage tourism . Among the most famous and well-known events is the Lentil Festival , typical product of the village e Slow Food presidium .

Located at an altitude of 1346 meters above sea level, Castel del Monte it is located in the province of L’Aquila and is part of the Gran Sasso and Monti della Laga National Park . Its architectural scenery is dominated by the classic structures of the tower-houses and from the vision of the great Bell tower that announces itself on the horizon in its panorama. Frescoed decorations or mosaicate , on the other hand, stand out on the walls of houses telling stories that bring back to the past and local traditions.

Walk in the historic center of Castel del Monte it means discovering magical corners and suggestive views. Its churches are particularly interesting: the Church of Santa Maria del Suffragio (15th century) lets admire it Baroque style of its interior, while in that of San M. Evangelist arch is guarded a pipe organ in pure gold . Finally, there is a large one near it Italic necropolis .

Pescocostanzo it is located in the province of L’Aquila. Located at a height of almost 1400 meters, from the point of view of architecture it results very well cared for and structurally balanced .

Its tourist itinerary is very rich and of great quality , starting with Basilica of Santa Maria del Colle with its 5 naves and splendid wooden ceilings. Very impressive is the Hermitage of San Michele Arcangelo : dug into the rock, it includes a residential area and one dedicated to worship. Pescocostanzo it is also famous for a varied handicraft production: from the iron processing to goldsmiths al bobbin lace .

From a naturalistic point of view, a place of great interest is the Wood of Sant’Antonio : is a nature reserve with beech trees , oaks , taxi , that hosts foxes, wolves, the Marsican brown bear . Inside there is the Hermitage of Sant’Antonio and its beautiful territory offers the perfect location for those who want devote yourself to hiking .

Pacentro , in the province of L’Aquila, is located at 700 meters above sea level. It is a medieval village of rare beauty and of great aesthetic balance .

The evocative vision of the square towers of the ancient Castle of Cantelmo-Candora , built on a privileged and strategic position. At the center of the village is located Piazza del Popolo with a seventeenth-century fountain and the Church of Santa Maria della Misericordia with its three naves and whose architecture on the outside communicates a peculiar grandeur. A visit cannot be missing from the tourist itinerary to the house-museum of Marlurita : a two-room farm house preserved in the original. The house belonged to a woman, Marlurita , who lived there until his death in 1978.

Another peculiar place and testimony of the past is i Canaje , that is the public wash house used by housewives who came here to do their laundry.

Pettorano sul Gizio , in the province of L’Aquila, is a village of medieval origin, even if the earthquake of 1706 forced the reconstruction of some buildings. In its historic center, walking among the alleys, the courtyards, the houses , stands out the imposing vision of Cantelmo Castle and, in particular, his pentagonal tower .

Along the itinerary of the village there are churches, including the mother church dedicated to San Dioniso, the Church of Sant’Antonio , the Church of the Madonna della Libera .

As for civil constructions, it should be remembered: the Castaldina , the building that takes its name from the local administrators, the Castaldi, with its baroque style facade and the 5 medieval doors access to the center still visible, including the Porta San Marco surmounted by a statue of St. Anthony of Padua. In its territory there is also the Guided Nature Reserve Monte Genzana and Alto Gizio : an area in which, among other things, they are located 12 specimens of the Marsican Bear .

The historic center of Civitella del Tronto , in the province of Teramo, is located on a cliff from which you can admire the panorama of wilderness that changes color according to the seasons.

Its tourist route allows you to discover evocative streets and views , while from Piazza Filippo Pepe you can enjoy the dizzying view of the surrounding landscape . It is here, moreover, that the so-called Ruetta , that is the narrowest street in Italy.

The itinerary of Civitella del Tronto , however, cannot fail to start from his famous one Fortress . The structure was built by the Spaniards in the 16th century and today it is possible to visit it in all its parts : from the walkways to the barracks, to the remains of the Governor’s Palace.

His are also very interesting buildings of worship , the various churches that are located on its territory, starting with Church of San Lorenzo with its single nave , in addition to Church of Santa Maria degli Angeli.

Anversa degli Abruzzi , in the province of L’Aquila, is located near the natural scenery of the splendid Gorges of Sagittarius and on a spur 500 meters high within an enchanting landscape dominated by the view of the mountains. His Old Town it is well preserved except for the Norman castle. The Church of Santa Maria delle Grazie (16th century) which opens to the eye with its Renaissance style portal surmounted by a rose window.

Very interesting is also the Church of San Marcello , meets after the Lookout on the Sagittario Valley and is dedicated to the patron saint: it is the oldest church in the village and its portal is in Gothic style. Anversa degli Abruzzi is known for producing ceramic products which here began in the fifteenth century and which sees in the pignate in terracotta its typical product.

The origins of Rocca San Giovanni , in the province of Chieti, date back to the year 1000. The hamlet is located on a hill about 150 meters high and is surrounded by the colors and scents of vegetation surrounding and from the blue of the sea . Its panorama, in fact, allows you to admire the beautiful Trabocchi coast . In its historic center it is located Heroes’ Square with the Municipal building and its portico and the Church of San Matteo Apostolo , next to which stands out the entire length of the Bell tower . Walking through the streets of the village and breathing the typical air of the past, you arrive at one Terrace which allows you to enjoy the view of the landscape below.

In the area east of Rocca San Giovanni there are the remains of what were the medieval walls and from there you can continue along the path crossing the characteristic alleys .

In its coastal area They are overflow which date back to the eighteenth century, including that of Tip Seahorse is that of Punta Punciosa , transformed into restaurants offer their splendid location for taste the local specialties.

The name of Castelli (Castles), a village in the province of Teramo, is linked to the processing of ceramic objects , a craft activity that originates here in the Middle Ages and is told in Ceramics Museum local.

The village is also important from the point of view tourist-hiker , since it is the starting point for paths that lead to the Gran Sasso and to well-known locations, including Field Emperor . Among its places of interest, the Church of San Giovanni Battista located in Piazza Roma: inside, where there are 3 naves, it is possible to admire one wooden statue which depicts the Madonna and Child (13th century).

Not to be missed is also the Church of San Donato with his charming ceiling completely tiled. The tiles, which depict different themes, create such a suggestive effect that Carlo Levi he defined the ceiling The Sistine Chapel of the Majolica .

Scanno , a village in the province of L’Aquila, is located at 1050 meters above sea level. The scenario of his Old Town it offers itself to the eye with a unique charm, so particular that it has been over the years immortalized by many famous photographers Italians and foreigners.

Walking through its streets means discovering a world where time has stopped and where you can admire the colors of the flowers that adorn the iron balconies of the old houses built in stone .

Among the places to visit is the Church of Santa Maria della Valle with its 3 naves; very interesting is also the Church of San Giovanni Battista , inside which there is a permanent exhibition that exhibits sacred statues.

Finally, in the itinerary, a visit to the Wool Museum and take time to discover of the goldsmith shops , flagship of the local artisanal production .